Who Will Rebuild After the Next Storm? Undocumented Workers, Unless We Break the Current Cycle 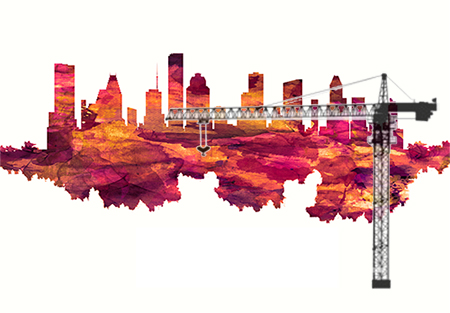 With the start of hurricane season, a reporter called to ask if we have the labor to rebuild from a major storm. My answer was immediate: No. Not even close. We still haven’t recovered from the last major storm — Harvey — because of a severe labor shortage in construction.

Much has happened in the ensuing three years that has made the labor shortage more acute. Just months before Harvey, our Texas legislature passed Senate Bill 4, the “show me your papers” law, which, after a legal challenge was upheld by a federal appeals court in 2018. The law originally was designed to help identify our large undocumented population, but it offended many U.S. citizens who felt it subjected them to racial profiling and raised concerns that legal immigrants — as well as undocumented ones — would leave the state for a more welcoming environment.

At the federal level, the Trump administration has ramped up enforcement in Texas by adding more boots on the ground to round up undocumented workers.

I have long supported some sort of legal status for undocumented workers who are already here, and I believe we should address that issue before we loosen visa restrictions to allow more workers into the United States. However, there’s no denying that the current system of ignoring the 11 million undocumented already in the United States, combined with heightened security at the border, is exacerbating the labor shortage in construction.

The lack of new workers combined with the retirement of older ones has led to a persistent decline in the construction workforce. That hasn’t changed, even with the widespread unemployment we’ve seen in the wake of the COVID-19 pandemic — even after the federal government declared construction crews essential workers.

There is a better way.

Our city and state are more dependent than ever on undocumented construction workers. Most have been here for years and do a fine job building houses and other structures. But because they are not legal, companies like mine can’t hire them. Instead, they exist in a shadowy world of labor brokers. They make good money, but they work long hours with no overtime pay. They pay no payroll taxes like the rest of us, and if they’re injured, they have no workers’ compensation insurance, so they rely on local emergency rooms.

Most people overlook this situation because it lowers the cost of labor, and in turn, home prices. Many would argue that it’s all good for business.

But it isn’t, at least not in the long term. It undermines an essential resource that the construction industry has relied on more than a century: a sustainable workforce. As I mentioned, we have a growing number of workers retiring and fewer coming into the industry. Where will the next generation of workers come from?

We do everything we can to recruit. A group of contractors recently began partnering with HISD and the Houston Community College to create internships for juniors and seniors designed to prepare them for construction careers with good wages and benefits. They spend half a day at the high school and the other half in a construction lab at HCC. Preliminary results have been great.

But it’s not nearly enough. How can the wages these kids will earn compete in an environment that allows undocumented workers — who account for half of the construction workforce in Texas — to prosper? They can’t, and they shouldn’t have to. And if the current situation continues, there won’t be internships in the future. In fact, there will be no hourly jobs with a career, no opportunity for our youth. We will be left with only the shadow economy of labor brokers and exploited workers.

That’s why I have called for a program known as ID and Tax that would provide legal status — not citizenship — for undocumented workers, provided their employers agree to hire them as W-2 employees. We have already seen similar programs work, including Deferred Action for Childhood Arrivals — which granted legal status to undocumented immigrants brought here as children. ID and Tax can help us know who the undocumented are and allow them to contribute to our economy without the constant fear of deportation.

If we don’t break the cycle, we will soon find ourselves without the skilled labor we need to rebuild from the next storm.