In Serving Our Communities.

We at MAREK pride ourselves on staying involved in the communities in which our branches operate. Through our philanthropic endeavors, we are able to connect with our fellow community members, both those within and outside of our industry, and to find even more value in the work we do as a MAREK family. After all, giving back to our communities does not just benefit those we help, it nourishes the souls of our employees and our company.

Here are a few of the projects and organizations MAREK proudly serves:

Every other year, MAREK teams up with Adams Insurance Service to serve as underwriting sponsors for this celebration that recognizes project excellence within our industry.

The Bonita House of Hope

Under the direction of Tyrone Evans, the Bonita House of Hope opened in June of 1996 as a halfway house for men and women who had been released from prison and others who were alcoholics or drug addicts A former drug addict himself, Tyrone sought to improve the neighborhood in which drug dealing and use occurred as well as the lives of the addicts inhabiting the area. Through a donation from MAREK, he was able to purchase and remodel the 18 homes situated on Bonita Street and convert them to a rehabilitation center.

With our long-standing tradition of commitment to the education and welfare of our employees, MAREK endeavors to foster not just jobs but careers in the construction industry. In 2000, the MAREK Scholarship was established to give three deserving applicants the opportunity to learn the trade skills on which a lifetime of employment can be built.

For more information about the scholarship, contact Yesenia Espinoza.

MAREK proudly sponsors the annual Rise & Shine event, which benefits The Rise School of Houston, a nationally recognized pre-school for children with and without Down syndrome and other disabilities. The event features a 5k run and walk, 1k fun run for kids and a day filled with family-friendly activities. All proceeds go directly to benefit the children who attend The Rise School of Houston. Rise & Shine MAREK event coordinator Judy Payeur, in the Fabric Wrapped Panel Division, organizes our annual participation to help support this worth cause.

The WorkFaith Connection is about training and giving assistance to those who are in financially disadvantaged situations. The organization serves people who had a difficult background, made mistakes in their life, and are now ready to turn their lives around and become contributing members of the community. After participating in a short program, participants are connected to local employers with entry-level positions. The WorkFaith Connection provides a systematic follow-up to facilitate job retention and advancement. MAREK is a strong supporter of this well-deserved organization. 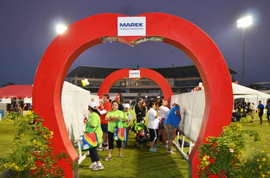 MAREK's San Antonio employees have embraced the mission of the American Heart Association to help raise money and awareness. In 2014, we proudly sponsored the Heart and Stroke Walk. The event featured a "Memory Walk," which provided participants a place to write messages in honor of those who lost the battle to heart disease or stroke. The frame of the "Memory Walk" was comprised of two giant hearts connected in a way that allowed participants to walk through and write a note to their loved ones.

With the help of MAREK, the American Heart Association has been able to raise over $23,000 in the last two years alone. 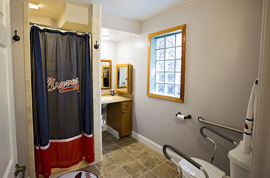 McCarthy Building Services has a program called Heart Hats, which involves employees going out into the community and helping in various ways. This year, MAREK partnered with McCarthy to improve accessibility within the home of Brandon Sudge, a 16-year-old high school student living with cerebral palsy.

In order to ensure Brandon can freely move about his home in Buford, Georgia, the team remodeled the home's restroom, which involved a full shower rework, removal and replacement of the floor, wall demo and reframing, and installation of a new vanity, sink and toilet. We also removed two doorways and replaced with wider frames to accommodate Brandon's wheelchair. McCarthy Building Services, MAREK and several other subcontractors donated all of the materials. 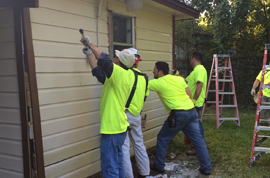 MAREK Houston partnered with Balfour Beatty Construction at Rebuilding Together Houston to fix up damaged and weathered homes in low income areas of town. With our own tools and 32 sets of elbow grease, our team replaced siding and caulked and painted the home exteriors. MAREK employee Chris Hetrick perfectly summed up the sentiments of the entire team when he stated, "I like this program because it helps the community and builds teamwork between all the volunteers." It was indeed a rewarding and character-building day. 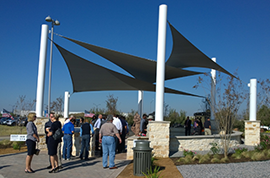 Wreaths Across America is a non-profit organization dedicated to honoring and thanking our veterans for their service and sacrifice. The Wreaths Across America mission is to "Remember, Honor, and Teach". The annual wreath laying ceremony at Arlington National Cemetery started in 1992 is now performed around the country. MAREK proudly recruited donations and volunteers for the 2013 Houston event.

In 2011, MAREK donated $50,000 to The United Way campaign, contributing to the success and betterment of children, families, seniors and communities throughout the greater Houston area. 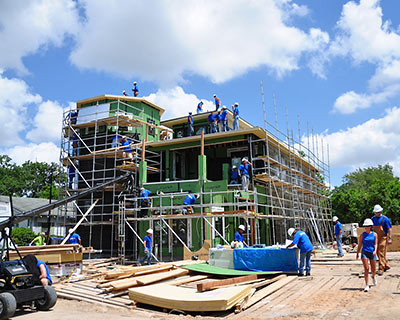 In September 2008, Hurricane Ike devastated much of the Gulf Coast, destroying the home of The Johnson family, among many others. Damages to the family's home included rotting floors, structural damage throughout and a nonworking toilet. For more than a year, marriage counselors Eric and Elaine Johnson lived in the hurricane-damaged home with their five daughters. Despite living in a home that was literally falling apart, Eric, who is also an ordained minister, and his wife Elaine donated all the money, food and goods they could spare to their neighbors in the 3rd Ward.

Two years later, their selfless acts of kindness were reported to the Extreme Makeover team. The entire family was sent to Paris on a much-deserved vacation while the 720-square foot house that was destroyed by Hurricane Ike was replaced with a 4,400-square foot home.

While the home designed by Studio Red Architects Would typically take four months to complete, the HNN Homes and Home Makeover team was able to complete the build in just seven days with the help of more than 3,500 volunteers. Twenty-nine MAREK Residential employees provided day and night sweat from start to finish to help ensure the Johnson's came home to the house they deserved and so badly needed.