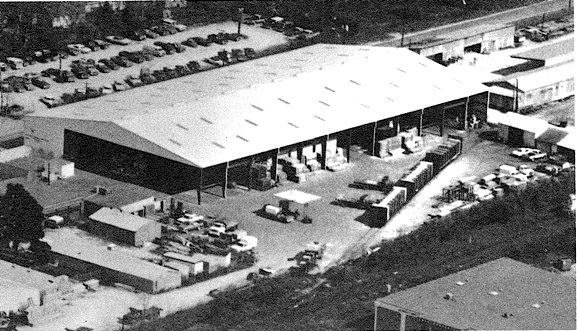 In 1970, Houston's area (Harris County) population was almost at 1.74 million, more than double what it was in 1950. Houston's downtown area saw its skyline changing rapidly due to two noteworthy men, Gerald Hines and Kenneth Schnitzer. The downtown area changed with the construction of the One Shell Plaza (1971) and Two Shell Plaza (1972), the Houston Center (1978), the Allen Center (1972) Centerpoint Energy Plaza (1974), and the Hyatt Regency (1972). In 1970, Gerald Hines removed an old country schoolhouse that was on the corner of Westheimer and Post Oak and began work on the development that was to become a very popular destination for shopping called the Galleria. Another great project was the 1974 contract on the John Sealy Hospital in Galveston and then followed by the 75 story Texas Commerce Tower (started construction in1978 and opened in 1982), which was the tallest building at the time in Houston. Work was very good during the 1970’s with the Texas economy growing at two and a half times that of the rest of the country because of the petrochemical industry. Because of the strong growth of Houston, recruiting workers was very difficult. One promising area for recruiting employees was right out of high school, especially over the summer months.

When CDI received the Greenway Plaza drywall installation contract, it became a major turning point for the company. The work on this project lasted 12 years. Much of the work involved demountable partitions fabricated by CDI on the site with Gypsum panels. Greenway Plaza was Houston's first planned commercial and residential complex developed by the late Kenneth Schnitzer. Environmentally controlled bridges, tunnels, and covered walkways interconnect most of the buildings in the plaza. Eventually, one of the company’s employees, Luis Solis, invented and patented a steel stud that had clips that replaced the typical demountable gypsum panel and provided a more cost effective method of installing reusable vinyl covered gypsum board used in commercial projects. Luis Solis received a cash bonus from CDI in recognition for his invention.

By 1973, CDI although still considered small, was well established and profitable. Lodie Stapleton had worked with the company for 11 years and ran the company as he thought it should be. He wanted to be more than an employee and had a chance to buy into another company, Southwest Drywall, owned by Charlie Sanders and Dub Harrison. Lodie was very dedicated to the Marek’s and was a good friend to Ralph Marek. Lodie helped find a replacement for himself who was Richard W. Phillips. Richard lived in Tulsa at the time where he worked as the Vice President of Sales with Flexible Walls, a company specializing in drywall and movable walls. When Dick came to work for CDI, he came into the company as a Vice President and General Manager on a year trial basis and if everything worked out, he would become President of CDI. When Dick came on board, there were only about 60 employees working in the field, which accounted for one-third of the number employed by Marek Brothers Company. He worked closer to Ralph than any other of the two brothers. John L. was not really too involved with CDI and spend less time on the day-to-day management of any of the businesses. Instead, he concentrated most of his efforts on charitable cases within the St. Vincent De Paul Societies. Bill was still involved, but was largely involved with the growing real estate concern.

Under the direction of Richard, CDI grew its sales from $3.5 million in 1973 to $80 million in sales by 1982. The tremendous growth of Houston in the commercial sector was the contributing factor to CDIs success. The good decisions made by some key people who were running CDI during that time made the success happen for the company, but we also cannot forget to mention the hard work put forth by the field crews. Dick Phillips, Stan Marek, Bruce Marek, Jessie Hajdik, and Ted Hajdik were the leaders of the company during that time and its ability to stand apart from the rest of the drywall companies, made it the success it was then and still is today. With success came expansion, which required them to get more office space. Their office originally began at 2204 Judiway and then moved across the street to Piney Woods Dr., which the company had purchased in 1972. They eventually renovated the building, which gradually filled up with CDI personnel. In time, they also leased a warehouse on 2217 Judiway to add to the expanding CDI office and warehouse complex. During this time, CDI diversified its operations and added on a paint department, along with a millwork company that they set up in the warehouse on Judiway. The company helped produce the components needed on the Texas Commerce and other CDI projects. The prosperity of the 1970’s was not just limited to Houston, but to other cities in Texas, as well. Some of the Houston’s general contractors took jobs outside the area and requested the services of CDI. The company went to Austin for McKee to work on the IBM complex, to San Antonio for W.S. Bellows to work on the Riverwalk Marriott, and traveled to Atlanta for Gerald Hines to build the Raviania project. Eventually, they set up shop in Dallas and one of the first major jobs the company did in Dallas was the Galleria, which was built for Gerald Hines.

Commercial Drywall Inc. was a very different company in comparison to Marek Brothers Company in its employee relations. Because of the union shop of CDI, employees were pretty much with the union and did not receive any of the company benefits. Union workers worked at an hourly wage, which the union dictated and were responsible for getting themselves to the job sites in the morning and make their way home in the evening. At one point, CDI had a workforce of 1,000 employees and it became very difficult maintaining such a large workforce. Maintaining productivity was very crucial to maintaining profitability. Miscalculation of a big project or a sudden decrease in productivity could cost the company tens of thousands of dollars.

Since productivity was so important to profitability, Dick Phillips and Bruce Marek solicited help from the industrial psychology department of the University of Houston. A team from the university visited the company and made some interesting observations. They made the company management start thinking about what they were doing, rather than just going with the flow. The study pointed out that trying to motivate the workforce to produce more would be a waste of time unless the company removed any de-motivators that exist. A survey was completed and approximately 400 employees responded to the questionnaire and as a result, they implemented a number of field-oriented programs. One innovation that resulted from the survey was the Budget Beaters program that rewarded employees of a crew with a luncheon barbeque for coming in under budget for a project. Management had the lunch catered at the work site for the crew. The program instilled a sense of team effort and did help improve productivity.

While CDI was prospering in the drywall business, so was Marek Brothers Company prospering in the real estate development. In 1970, John L. visited a friend in Magnolia, a small town northwest of Houston, who convinced him of the development potential in the area and convinced him into buying a 50-acre tract of land to develop. They subdivided the land into one-acre lots, built homes on the lots, and carried the mortgage notes on the homes, as well. The first development was called Dogwood Hills Section 1 and over a period of 15 years they bought more land, developed it, subdivided it, and built 16 more subdivisions. A major development was Blue Bell Village, which was a combination of houses, duplexes, four unit complexes, and apartments for rent, which accounted for about 1,000 units overall. During the 1970's, Stanley Construction developed several subdivisions that included 160 lots in Walnut Springs, 60 lots in Fawnwood, 187 lots in Turtle Creek in Montgomery County, 158 lots in Atascocita, 150 lots in Live Oaks Estates, and 86 lots in Oakwood.

Before the end of the decade, the Mareks also added another business venture to their enterprises. Tommy Marek, Ralph’s youngest son, joined the field workforce of CDI in 1971, transferred to Stanley Construction a couple of years later and then developed what was to become the Horticulture Group, which is now called Magnolia Gardens Nursery. The company consisted of two divisions, the Container Division located in Waller and then the Tissue Culture Division located in Pinehurst, of which, Tommy eventually bought out the other stakeholders. The company is a wholesale grower of perennials, shrubs, and trees, which covers in excess of 200 acres of greenhouses and outdoor plants sold to landscapers and retail nurseries.

By the end of the decade, there were approximately 60 drywall companies in Houston, of which Marek Brothers Company and Commercial Drywall Inc were the largest. Most of the competitors were using subcontract labor and Marek’s slowly started to follow suit in residential work. The home building market had also changed, whereas in the 1960's, the builders were mostly smaller builders, but by the end of the 1970's, major conglomerates built most of the homes and apartments. Gone were the days of verbal estimates and a handshake, replaced by formal written bids and contracts demanding top quality work at the best possible price.