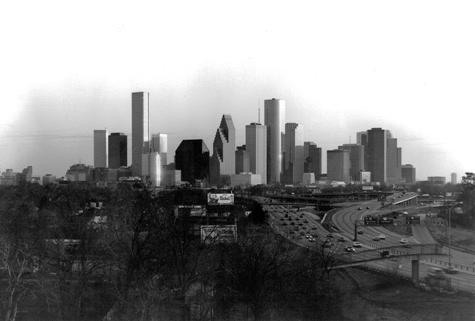 The 1980s came in with a great promise with the biggest backlog of business in history. Working on prestigious buildings had become the norm rather than the exception. CDI was essentially handling all the highest profile jobs in Houston. The branch offices have also been doing very well. Some of the more extensive projects that CDI did were the 71 story One Main Plaza in Dallas, where CDI spent 2 years negotiating. The 64 story Transco Tower interior work was awarded to CDI in September 1981 and in 1982, the Houston office was awarded other big jobs, such as the Texas Commerce Bank, First City Tower, Greenway Condominiums I and II, Allen Center III, Post Oak Central Three, Oxford Condominiums, Host Hotel, Northwind Plaza, Shell Woodcreek, Airport Terminal C, and Northbelt Atrium II. The Austin office was awarded contracts for Montgomery Ward, Brackenridge Hospital, Several buildings at the IBM complex, Foley’s, Brockton Business Center, Austin Police Station, Motorola, Tracor, and Safeway. The San Antonio office was awarded contracts for Valero II, North Center, San Antonio Savings Association, U.T. Health Science Center Human Resources Building, JC Penney Credit Support Facility, and the American Hospital. The Dallas office got the interior work for the Park Central, Lease build-outs at the Lincoln Center, Farmers Branch Bank, Galleria, Placid/Elm, City Center, Continental Plaza, and Arco.

With the increase of work, there also was an increase in staff. By the end of 1981, the company built a 40,000 square ft office building to house the increase of staff. Ralph Marek was very instrumental in changing the company from a commercial drywall enterprise into the largest interior contractor in the Southwest. Over the years, the company expanded into new areas offering a comprehensive service including painting, wall covering, flooring, acoustics, insulation, doorframes, and millwork.

Meanwhile, Bruce and Stan Marek had grown with the company. Bruce had gained most of his experience working in the field, while Stan worked closely with Dick Phillips. People expected Stan to have Ralph’s charisma and wisdom, but instead he was tougher than Ralph was and less tolerant of imperfections and less patient. Stan also fell into the role of “wearing the black hat” and at times Dick used Stan to sort out difficult or unpleasant situations. Bruce, on the other hand, was a doer, like his father, John L and soon established a reputation of getting out in the field and working hard.

In 1982, Dick decided to leave CDI, join Century Development, and make way for Stan, Bruce, and Paul, Bruce’s younger brother to manage the company. However, by mid 1982 the recession that hit the rest of the country finally hit Texas. Some of the customers informed CDI to place some of the projects on hold, so in response they had to lay off about 200 employees. Regardless of the economy, CDI still had a considerable backlog of work and there was general optimism that CDI would weather the slowdown without too much hardship. The year actually ended with a positive note with several contracts coming in. The Austin and San Antonio branches also started paint departments. Dallas's operations had completed a good year in drywall and acoustics and expanded into the computer flooring business. Meanwhile, the Houston office set up a special warehouse operation for a major project that involved supplying the 64-story Transco Tower II with a Vaughn wall system.

An important growth area in the early 1980s was the commercial remodeling business. As the new construction industry cut back, remodeling started to increase, and by the end of the year, CDI had three full-time crews servicing more than 60 buildings in Houston, ranging in size from a single story to a 75-story building. During this period, builders who had exclusively only built in Houston were now building out of town and out-of-state. Previous customers called upon CDI to take care of the drywall work for them. Company crews completed multi-family projects throughout the East Coast. Ray Campbell was responsible for production of these out of the way multi-family projects. These projects kept the company going through these tough times in Houston.

In 1983, Houston began seeing higher vacancy rates on commercial real estate and by 1985, Houston had a 20% vacancy rate and oil started to see its downtrend to $32. Non-residential permits were down by 40% from the previous year. San Antonio and Austin remained buoyant, but Dallas permits were down about 22 %. By April 1984, CDI had to reduce its workforce in Houston from a high of 1,200 in 1982 to a mere 375. In 1984, the company got a foothold into the Florida market by purchasing Metro Drywall and its sister company, Metro Caulking and Waterproofing. Nothing the company did could offset the effects of the recession and the profits were running substantially below 1983 levels. The company had to lay off more people until the workforce was about 300 because of the low profit margin, which had a lot to do with the high cost of the union workers.

There was a strong belief that the main cause of the recession was a contraction in the money supply by the Federal Reserve System to control high inflation. The hundreds of Savings &Loans (S&Ls) that had become insolvent at this time, worsened the recession. Between 1980 and 1983, 118 S&Ls with $43 billion in assets failed. The Federal Savings and Loan Insurance Corporation (FSLIC), the federal agency which insured the deposits of S&Ls, spent $3.5 billion to make depositors whole again. The FSLIC pushed mergers as a way to avoid insolvency. From 1980 to 1982, 493 voluntary mergers and 259 forced mergers of savings and loans were guided by the agency. Despite these failures and mergers, 415 S&Ls at the end of 1982 that were still considered insolvent. Furthermore, the Reagan administration did not want to alarm the public by closing such a large number of S&Ls These actions instead significantly worsened the S&L crisis. The S&L crisis triggered by the recession lasted well beyond the end of the economic downturn. The crisis finally quelled by passage of the Financial Institutions Reform, Recovery, and Enforcement Act of 1989. The estimated total cost of resolving the S&L crisis was more than $160 billion.

When Houston was in the middle of the recession, the lowest bidder usually got the contracts and companies that used union labor were not able to compete. The union workers, who commanded artificially high wages throughout the 1970s, were unable to competitive. By contrast, the open-shop commercial division of Marek Brothers Company was still able to compete for what few jobs there were. A decision made in late 1984 to split off the open-shop commercial division of MBC from the residential arm of the company and naming the company Marek Brothers System, gave it a more competitive edge for obtaining jobs. The recession caused mainly by the low oil prices and was restricted within the oil belt. Times were tough, especially when Houston had 200,000 vacant housing units and 35 million square feet of unoccupied office space, some 26% of all available office space in Houston. It was going to take some time to work this excess off. Most of the jobs were bid without a profit margin, just to make sure the workers had jobs through the tough times. Despite the bad economic conditions, CDI was still getting jobs, management and the workers tightened their belts, and employee productivity increased to an all-time high. Austin and San Antonio were able to weather the economic downturn better than Houston was, and Austin was seeing a construction boom. The multi-family division was doing well in 1986, since it took its business out of state and into some of the Eastern states where the economy was doing better. The economy was doing better there since it was not dependent on the oil industry, as Texas and Louisiana. At the time, the Eastern states were experiencing good economic conditions and had a shortage of labor and gypsum board, which the Marek Brothers were more than happy to supply. Marek Brothers Company took advantage of this opportunity and got involved in the multi-family construction in states like Massachusetts, Connecticut, Ohio, Virginia, Indiana, Tennessee, and South Carolina.