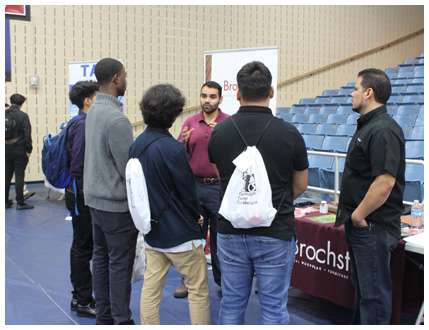 Last month, the Construction Career Collaborative (C3) held their first annual Career Fair for high school students representing construction companies and organizations from the Houston area.  The event offered companies an affordable way to showcase their career opportunities to groups of students who may not have ever thought much about those jobs before talking with the company representatives.  The 234 students attended the event in scheduled shifts by school district, so that each small group of students had the opportunity to interact with the company representatives on a personal level and were able to have individual questions answered.  Some students even came prepared with copies of their résumés to hand out!

Angela Robbins, Construction Career Collaborative Associate Director of People Development, Compliance, and Operations was in her element that day, helping form connections between individual students and construction professionals.  I asked her about the preparation that had made this event possible.  She said, “Recruiting for the program was probably my favorite part, because it gave me an opportunity to connect with the kids to kind of get an idea of what they wanted. … Once they got here, I was able to recognize a bunch of them and help them connect with the right companies, which is pretty rewarding.” Brianna Wright, American Subcontractors Association Houston Executive Director, explained that she was there to tell the students about trade organizations, and how such organizations are great resources for construction craft professionals.  She said, “No matter what it is that you end up doing, find your association and join it.  It is good for education, networking, that type of stuff.”

Next, I talked with two teachers who had brought a group of students to the fair.  William Pearce and Mark Petrie teach at Spring Woods High School.  Petrie teaches Construction I and II and a course called “Jack of all Trades.”  Pearce teaches Intro to Welding, Advanced Welding, and Construction Math.  When I asked what they thought about the Career Fair, Petrie replied, “The Career Fair has been fabulous.  We’ve made a lot of contacts, met a lot of companies – companies that the students may not have understood even existed.”

I asked David Schlater, MAREK Field Training Leader, what he thought of the types of questions the students had been asking at his booth.  He said, “It has really impressed me because they’ve actually had questions.  A lot of kids that come to these events don’t have questions all the time, but these kids really wanted to know about the construction industry – wanted to know if we

offer benefits, if we have a training program.  I was able to tell them we did, so this was really exciting for me – to be able to share that information – because they were actually interested.”

I talked with two representatives from United Tool & Fastener: Bobby Williams, President, and Charlie Gertson, Safety Specialist, who were presenting a Fall Protection Demonstration.  Gertson said that the Career Fair gives students an idea of what it is like working in the construction world, and gives them information about what to look for when they visit a jobsite or apply for a job.  This puts them “ahead of the curve” compared to students who have not attended an event such as the Career Fair.

Richard Shelley is Vice President of Brochsteins, an architectural millwork company that builds custom architectural woodwork and furniture.  He talked about the aging skilled craft workforce: “Developing the next generation is key.”  He talked about the students’ response to the information he shared with them about career opportunities at Brochsteins.  “I think understanding that there are so many opportunities out there with varied career paths, with the opportunity for growth, has been eye opening for a lot of them. Finally, I talked with Tommy Hernandez, Chamberlin Roofing & Waterproofing Executive Director of Human Resources.  He talked about how the Career Fair helped the students realize the appeal of a career as a skilled craftsperson.  He said, “When talking about trades or college, the ones that say they want to go to college, I think 95 percent of those said that is because their parents wanted them to go to college.  After further discussion, the opportunity to go into one of the trades is a lot more appealing to them.  The fact of earning money instead of spending money for a little while until you decide what you really want to do.  The opportunity is here, not just with Chamberlin, but with the other companies that are here today – shows that there is a big opportunity for the students to do something quick and make some money for themselves with career potential.”

The first annual C3 Career Fair was considered a great success by students, teachers, and industry professionals.  Planning for the 2020 Career Fair will begin this summer.  Companies interested in participating in the planning process should contact the Construction Career Collaborative.

Watch more of these interviews in the 6½-minute video below.