Construction Conference in Houston Puts Focus on Women in the Industry 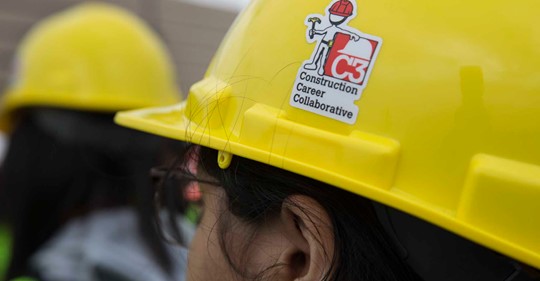 Construction isn't just for the guys. In fact, one of the most pervasive myths that we hear all the time is that women are somehow not welcome in the industry.

The Houston Chronicle did a great feature on the recent She Builds Houston Construction Conference hosted by the Construction Career Collaborative and the National Association of Women in Construction. Reporter Jacob Carpenter talked to student Karla Cedillo, who thought she would only find men at the event:

Instead, Cedillo, a senior at Aldine Senior High School, found dozens of women employed by some of the city’s leading construction companies, who implored her and about 1,000 other girls to consider careers in the fast-growing and well-paying industry. Donning a yellow vest and sticker-dotted hard hat, Cedillo learned about opportunities in the industry from female professionals before grabbing a DeWalt screw gun and getting tips on hanging drywall.

“That was a moment, a time in my life, when I thought girls can do anything,” said Cedillo, who aspires to become an architect or interior designer. “They have inspired me to actually follow my dreams, to do what I want to do, that the sky is the limit.”

As the construction industry seeks to replace an aging workforce and diversify its mostly male ranks, dozens of local employers met with Aldine ISD middle and high school girls at the region’s first She Builds Houston conference, aiming to inspire the next generation of construction employees.

Carpenter also spoke to a young woman whose family has been involved in the industry for generations:

Like many girls at Thursday’s conference, Jocelyn Zarazua, a senior at Aldine’s Blanson CTE High School, has a family lineage of construction: Her father is a manager for a small foundation company. On trips to job sites, Zarazua said, she has seen a woman working only once — a trend she hopes to break.

“I want to, right away, get a job in this career and then also be in a university,” said Zarazua, who plans to specialize in machining. “It brings me joy to be here. I feel better about myself. I see opportunities for me.”